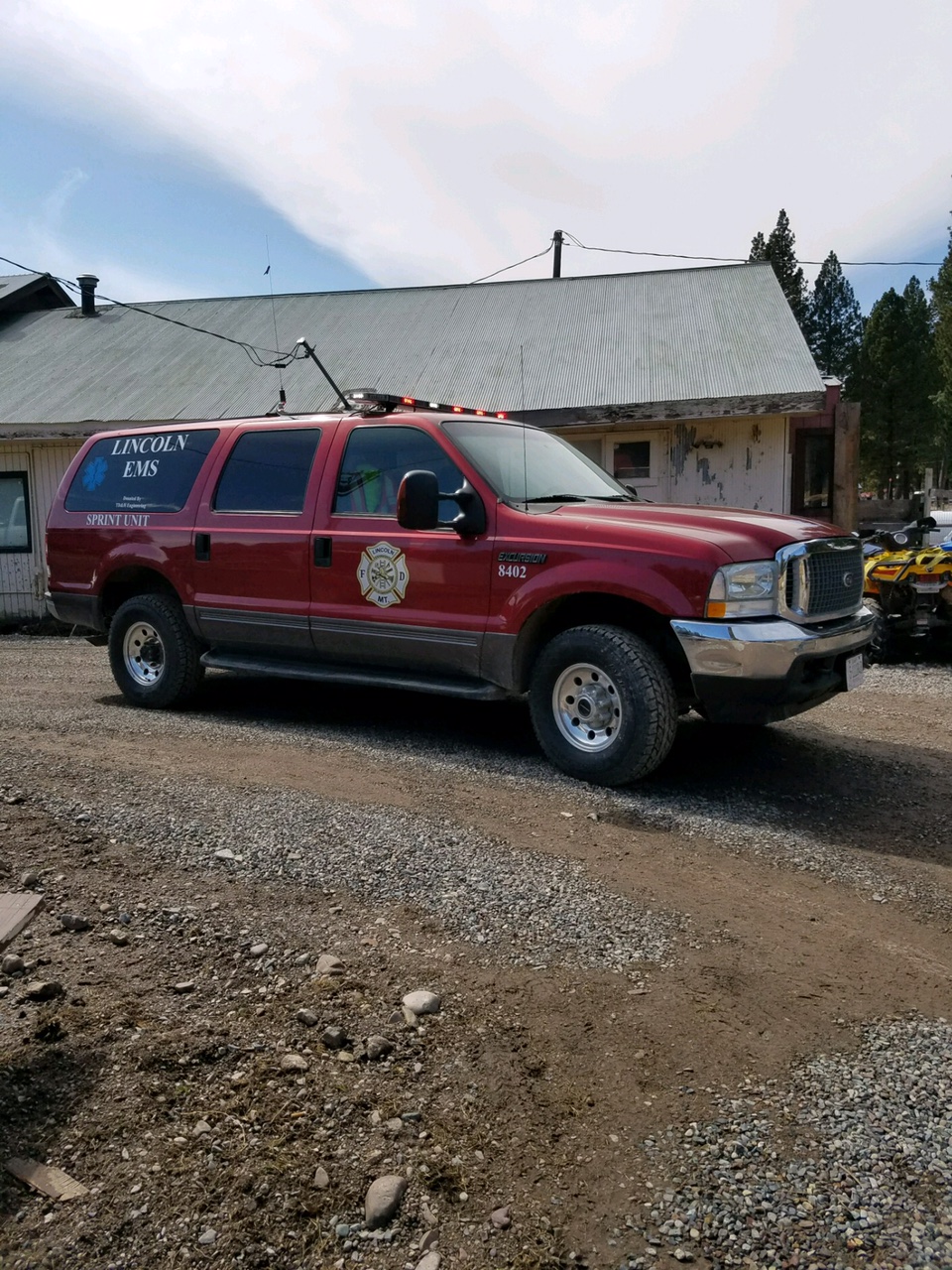 A red SUV marked as the Lincoln EMS Spring Unit made its appearance in Lincoln about two weeks ago, thanks to TD&H Engineering of Great Falls. TD&H donated the 2004 Ford Excursion to the Lincoln Rural Fire District for use as the Quick Response Unit’s “Sprint” vehicle.

The vehicle is expected to greatly reduce response times for medical emergencies in the Upper Blackfoot Valley, and allow responders the capability to reach areas an ambulance or the Fire Department’s rescue truck may not be able to get into.

“This is what I’ve been fighting for since we started the (Emergency Medical Service) program,” Aaaron Birkholz, the EMS director and Assistant Fire Chief, said. “I was either looking for a truck we could put a canopy on or an SUV, and you couldn’t get any better than this. It can haul three people. We have enough room in the back that if we’re up in the mountains and have to haul somebody down to the ambulance, we can.”

TD&H Engineering of Great Falls decided to provide the vehicle to the District following a “sales pitch” made to Regional Manager Wade DeBoo by LRFD Chairman Bill Frisbee. Frisbee’s son, Jonathon, who works for TD&H, mentioned the company had a vehicle that was sitting idle, so Frisbee prompted him to stop in for a visit during a recent trip to Great Falls.

“We had worked with Bill a few years ago on a project there for the Lincoln Sewer District. We got to know him a little bit,” said DeBoo. “We have a number of spare vehicles we use for different things for our business. This one we hadn’t been using too much. We talked about it.” 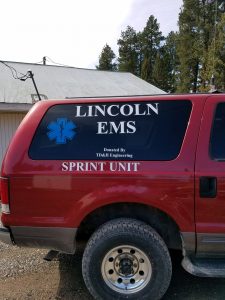 DeBoo said it sounded like it would be hard for them to find a vehicle that would be reliable enough to meet their needs and their spare vehicle; seemed like a good fit.

“Hopefully it will help them to be able to respond faster, more efficiently to whatever sort of emergencies that they have,” DeBoo said.

The logic behind the sprint unit is simple. It’s a vehicle dedicated to medical response and outfitted with advanced life support equipment such as a heart monitor and medications for heart attack victims, diabetic emergencies and allergic reactions. It’s always in service, assigned to Quick Response Unit EMS personnel on a rotating basis.

“It’ll never leave our service area. There will always be somebody there. That’s the whole point of having a sprint unit…to get somebody there right away,” Birkholz said. “Just know that whenever somebody’s in it, they’re waiting for a call.” For EMS personnel, it’s an important tool to have because it allows a trained responder to head directly to the scene of a medical emergency without having to first pick up a vehicle at the Fire Station or Ambulance barn.

“I tell you one of the most heart-breaking things to do is to get a call and have to drive past the scene to go get an ambulance, when you could be there…taking care of somebody,” said Frisbee, who is also an active EMT with the QRU and Lincoln Ambulance. Although the Sprint Unit can’t be used to transport patients to a hospital, it can be used to get accident victims out of the weather and give EMTs a sheltered area to work, if needed. Additionally, if the ambulance has only one EMT available for a response, they can be assured another trained person will already be on scene and available to serve as the second responder required for ambulance transport.

Birkholz said there may be a misperception in the community that the vehicle was purchased with taxpayer money, but he said it was acquired thanks entirely to donations. The vehicle and most of its value was donated by TD&H. Donations and funds raised by the annual LVFD rifle raffle covered
$2500 of its value, and donated funds also covered the cost of a new light bar for the vehicle. The other equipment needed to outfit the vehicle, such as the siren, radio and medical equipment were already on hand: As Frisbee explained, it was a “no cost ” vehicle for taxpayers, and a long-term benefit for Lincoln. “Ultimately, it’s going to be one of those investments the Fire Department makes that will pay dividends for our community,” he said.