We were notified today we were selected for the job. We scored 87 points out of 100 and KPFF scored 86 points. (For those of you that don’t know KPFF, they are a huge consulting engineering firm with 20+ offices across the US.) Per our contact at the City, KPFF “destroyed” us with their pedestrian bridge experience. However, the selection committee recognized that we spent a significant amount of time on our project approach and the renderings which put us 1 point ahead of KPFF. It is worth noting that KPFF did the 30% design for the bridge and was ultimately not selected. Congratulations to our entire structural team.

Yesterday, we submitted a Statement of Qualifications (SOQ) to the City of Spokane for improvements to the Don Kardong Pedestrian Bridge in the U-District (Don Kardong ran the marathon in 1976 Olympics and is the founder of the Bloomsday Race.) We wanted to “swing-for-the-fence” on the SOQ so we provided Spokane some ideas for the bridge improvements. In an effort to stand out from our competition, our own Kyle Cramer built a computer model of our ideas and provided renderings to include with our proposal. 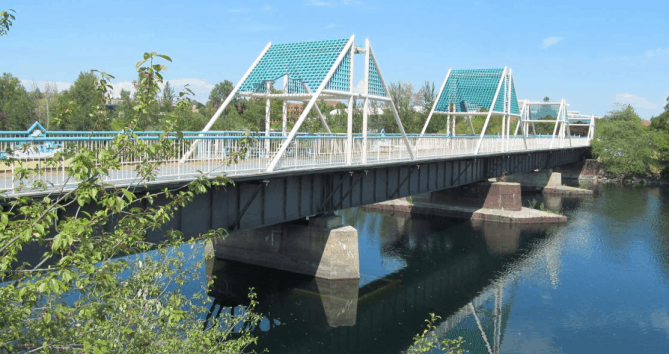 Kyle replaced the existing decking with precast concrete panels, added lookouts on the north side of the bridge, improvements to the south side lookouts, emblems of our local universities in the lookouts along with shade structures, benches, lighting, railing, and the “Spokane Centennial Trail” on the side of the bridge. Really amazing stuff.